It’s no longer enough to talk about trolls and trolling in the abstract. We have a collective blind spot and need to pay closer attention to the threat of having social media spaces manipulated.

Social media spaces are easily colonized and destabilized by pro trolls who’ve been trained. Some posts are planned and constructed; they’re designed and created as a performance to elicit a certain outcome. There’s a science behind pro trolling. Once you recognize the techniques and understand the strategy, spotting them becomes easy. Delete them right away, don’t fall for the ‘freedom of speech’ gag order, hateful and ugly speech is central to pro trolling.

When a new member comes out swinging, that’s a caution flag.

Example. The new member has a name that is generic white male. The new member posts a discussion topic with a headline that makes it stand out. Maybe the font is large, the message is dumbed-down and the poster wants people to weigh in on a very contentious subject—racism, for example—any hot button topic that will generate interest and controversy. The goal of the post is to snag some real racists, then add more fake racists in order to create the evidence needed so the site/article can be vilified and discredited.

Once the post is up, the pro trolls will get to work. Several will work one thread and if the attack is severe they will completely swamp the thread. They seed the conversation with extreme views, they post inflammatory hate-filled posts. Pro troll comments are often filled with ALL CAPS and lots of exclamation marks!!!!! Their role is to jack up adrenaline and stoke tensions.

It’s like building a bonfire, they mix and mingle and add their extreme comments in order to build confusion and conflict in the minds of the unsuspecting who are reading and watching in horror as their once-good site becomes awful and degraded. Another goal accomplished: demoralization and doubt; momentum is lost and people cease their support.

There will be pro trolls whose job it is to loudly accuse the site of being evil, awful and bad.

And it appears they are right, the evidence is right there in the comments—and often those comments were made by the pro troll team. And shortly thereafter media outlets pronounce your site/article as crazy, fringe, and retrograde. Mission accomplished.

Pro troll performances disappear as quickly as they arrive. After they’re gone, your cheeks burn, you feel like you should pat down all your pockets to make sure you still have your valuables. Everything on your site goes back to being quiet and civil, the usual normal range of discussion. But the damage is done.

It’s time to recognize that pro trolling has become a tactical standard of attack, for better or worse, and it’s time that the media developed an awareness of this in all of their reportage.

Given the daily fiascos in American politics it might be easy to miss the fact that the Military Industrial Complex is doubling its revenue, now that President Rump has convinced/ frightened all NATO members into increasing their military spending.

I’m not sure when it happened, maybe it was when the millions of refugees started pouring out of the Middle East, but it dawned on me that our global community is constantly being manipulated by a small group of weapons dealers, all of whom are virtually invisible and unknown to the rest of us.

END_OF_DOCUMENT_TOKEN_TO_BE_REPLACED

Thus far in the global migrant crisis Canada’s border has been quiet, mostly due to our geography/isolation. But now that the U.S. is closing in on itself and relegating immigration to a zone of fear and instability, we have seen a threefold spike in the number of refugees/migrants coming across.

You know people are desperate when they trudge north through waist-deep snow and brutal winds in the deepest, darkest winter for 10 hours to the border, losing fingers and toes to frostbite in the process. Now that spring is whispering in the wings and soon the weather will be warm, this trickle could very well turn into a torrent. The New Yorker reported on an underground railroad poised to launch the migrants they are currently housing and protecting. Soon we may see our nation’s claim of racial tolerance tested.

On another note, Melania Trump has been on my mind for a long while; I’m not alone in wondering what kind of man Rump is in private and what she must endure. In one of the protest rallies outside the NYC Rump Tower someone held up a sign that read: Melania, blink twice if you need to be rescued.

This week, 22 Minutes, Canada’s troupe of irreverent comics who riff on current political topics, put out their latest video: “Mrs. Trump, this is the third time this week.”

So I’m posting it here, because we’re all holding our breath and it’s Funny Bone Friday, Episode #12

We have to change our ways, and fast, and yet our politicians are still smiling for the cameras and pushing fracking and LNG plants; in faraway offices behind closed doors they’re still approving oil and bitumen pipelines that traverse vast stretches of land, up and down mountain ranges, in an active earthquake zone, pipelines that are bound for coastal tankers which will then navigate rugged BC fjords during winter storms and other extreme weather events, pipelines that are bound for tankers that will go right through the heart of Vancouver’s staggering coastal beauty.

END_OF_DOCUMENT_TOKEN_TO_BE_REPLACED

Easy instructions for readers of all ages! Recommended by experts in the weapons trade! Non-fiction by I. R. Soul!

KEEP THOSE FIGHTER JETS IN THE AIR

Bombing campaigns are important. Withdrawing your fighter jets from the Middle East, as Canada plans to do with its six CF-18s, is a big, big mistake. There’s absolutely no truth to the rumour that the best way to lose control of your country’s fiscal autonomy is to buy in; contracts signed with the Military Industrial Complex come with reasonable payment terms. You can trust us, we’ve been honouring our commitment to upgrade our product lines for nearly 100 years.

BE SURE YOUR MEDIA IS ON SIDE

There’s no point in confusing the little people, keep the stories simple! They have been well trained in loss and revenge so be sure to hammer home any losses on our side. Ignore casualties on the other side, it’s best to pretend there aren’t any. Encourage simplistic thinking, the only two protagonists allowed are Us and Them. There’s a fringe movement of lunatics suggesting the equation ought to be We = Us + Them but that is dangerously naïve.

END_OF_DOCUMENT_TOKEN_TO_BE_REPLACED

Prime Minister Justin Trudeau was sworn in yesterday and this country has never been more jazzed. 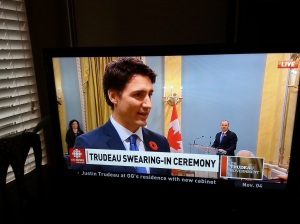 Something amazing is happening in Canada. For the first time in my life, people are excited about politics. Yesterday for the swearing-in ceremony 3500 people crowded the grounds at Rideau Hall to participate. Four cool young dudes from Montreal got up and 4 am to drive 192 kilometers to Ottawa and be the first in line to get in to what they believe was an historic occasion—and trust me, prior to this, “cool dudes and Ottawa” was an oxymoron, though I suppose that depends on who you’re talking to.

END_OF_DOCUMENT_TOKEN_TO_BE_REPLACED

Last night I spent a marathon 6 hours watching the federal election results as the Liberal Party were swept to power with a majority of seats. Thank the gods, change has come! Many months ago I had a vivid dream about Justin Trudeau, so vivid that I convinced myself that soon we’d see the back of Stephen Harper and his retrograde policies. So I started a blog called I Dream of Justin…Trudeau, that is which would compile the dreams that other people might be having of Justin Trudeau — or any Canadian politician for that matter.

There was a fascinating American blog called I Dream of Barack that compiled people’s dreams in those early days of Obama’s rise to the Presidency; I hoped for confirmation that political change was percolating in the Canadian collective unconscious. I Dream of Justin…Trudeau, that is got exactly one hit — from a kind relative offering encouragement. But no matter, it turns out that the people were dreaming, too, because our country now has a leader with vision and courage, my heart is bursting, and we can start to feel proud again.

The Truth and Reconciliation commission just ended and now the government must follow through with its recommendations. Top of the list should be making it mandatory that the history of residential schools is taught in grade school curriculum.
Two weeks ago I was in a Fraser Valley classroom and the teacher asked the students (all non-Native), whose ages ranged from 19 to 25, if the history of residential schools should be taught in schools. Of the ten students, two said yes, eight said variations of no. “They get enough handouts already,” one student said and the rest agreed, parroting what they’ve heard many times before from people just as ignorant. Further discussion revealed the students had little or no actual knowledge of residential schools, let alone the horrors that occurred inside them or the terrible repercussions that ensued.

END_OF_DOCUMENT_TOKEN_TO_BE_REPLACED

**In honour of the release of Omar Khadr, a 15-year-old translator-turned-soldier who was held for over a decade in the gulag otherwise known as Gitmo, and in honour of the documentary about his experience being aired on CBC Thursday, May 28, 2015**

When Chinese labourers were brought to the west coast in the 1880s by the Canadian Pacific Railroad to work on construction, they were paid one third the wages of other workers and sent into the most dangerous situations. Thousands lost their lives. Then for ensuing decades, they were treated terribly; federal and provincial governments subjected them to decades of legislated discrimination. Racism is a chronic, shameful truth in our collective history.

END_OF_DOCUMENT_TOKEN_TO_BE_REPLACED

We Earth Men have a talent for ruining big, beautiful things. The only reason we didn’t set up hot-dog stands in the midst of the Egyptian temple of Karnak is because it was out of the way and served no large commercial purpose.” - Ray Bradbury's character, Jeff Spender.